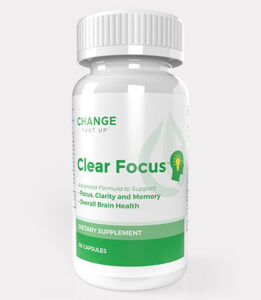 “I was starting to forget little things like where I left my keys or why I walked into a certain room. Clear Focus™ has certainly helped me”— Marc P.

Choose Your Package
Select your money-saving option below

$29per bottle
ADD TO CART

$24per bottle
ADD TO CART

$19per bottle
ADD TO CART

Clear Focus™ is a powerful nootropic supplement formulated with a unique combination of well-studied botanical extracts and nutrients that may provide support for mental focus, clarity and energy levels, as well as motivation, productivity, creativity and feelings of well-being.1

A long-time staple in traditional Chinese medicine, Ginkgo biloba is best known for its ability to improve blood flow to the brain and to enhance levels of key brain communication compounds called neurotransmitters. Studies have shown that supplementation with Ginkgo biloba may promote improvements in memory, recall, focus and attention.2

ALCAR is an amino acid that helps enhance the brain’s energy supply, and it also supports the release of the brain chemical acetylcholine, the all-important neurotransmitter that is essential optimal cognitive function. ALCAR may support alertness and help combat feelings of physical and mental fatigue, and it may also promote feelings of well-being.4

The most prevalent amino acid in the brain, l-glutamine is often referred to as “brain fuel” because it’s a precursor to the brain’s primary neurotransmitters, glutamate and GABA. Supplemental glutamine is particularly important during times of stress, which can rapidly deplete the body’s stores.6

A long history in the traditional holistic practice of Ayurveda, Bacopa monnieri has been used for centuries for its neurological benefits, such as improving cognitive function and enhancing memory. One of the most highly sought-after nootropics, Bacopa may help increase blood flow to the brain, enhance the activity of key neurotransmitters (such as acetylcholine, serotonin and dopamine) and provide antioxidant protection.7

Alpha-GPC is a precursor to acetylcholine, a neurotransmitter that plays a critical role in memory and cognitive function. Alpha-GPC has been shown to help improve cognitive function, improve physical performance, enhance mood, facilitate learning and support reaction time.8

First identified by Chinese scientists in the 1980s, Huperzine-A inhibits the breakdown of acetylcholine, thus helping elevate levels of this key neurotransmitter that is important for mental energy, focus and clarity. Research has shown that Huperzine-A may help enhance cognitive function, memory and daily living activity. Along those lines, Huperzine-A is often used by folks who want to think more clearly, learn more quickly and recall more accurately.9

What Customers Have to Say

“I was having a hard time concentrating at work, but now thanks to Clear Focus I am razor sharp!”

“In the afternoons I felt like I had brain fog and had a hard time with my motivation and overall productivity.  After 1 week of taking Clear Focus I feel like I’m charging threw my day .”

“I hate to admit it, but I felt like I was having more and more “senior moments.  A perfect example,  I was heading to the store for some eggs, then when I got there I forgot what I came for.  I bought a few other things and then when I got home I remember I didn’t get eggs.  A friend of mine recommended Clear Focus.  I cannot believe how much better my memory is, thank you Clear Focus.”

“I take Clear Focus every day, it helps me with my energy levels and gives me a sense of clarity.”

Get in on the latest health advice & best products

Sign up to get our award-winning newsletter to help you transform your overall health and lifestyle. This is a complimentary newsletter and you can unsubscribe at any time, but we are pretty sure you won’t want to.